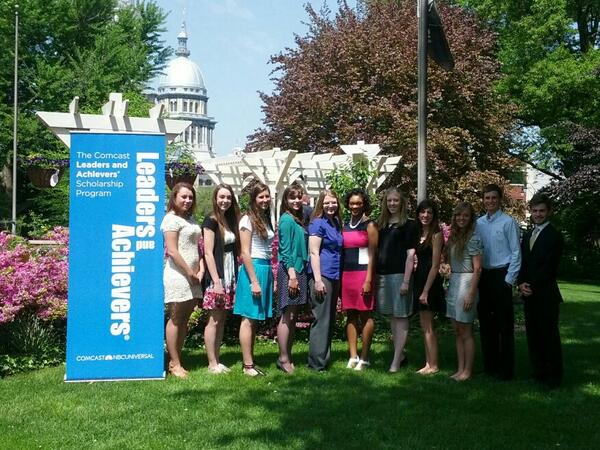 Comcast and the Comcast Foundation announced the names of the 2014 “Leaders and Achievers Scholarship” recipients from Central Illinois today (see list of recipients below).  The scholarships are awarded to high school seniors who are viewed as catalysts for positive change in their communities, have solid academic records and serve as role models for their fellow students.  The program’s mission is to recognize those high school students who play an active role in and help others in their communities, motivate them to continue on their paths and encourage other students to work to improve their communities as well.  Recipients receive $1,000 grants to be used for college expenses.

“This year’s Comcast Leaders and Achievers Scholarship recipients demonstrated a strong commitment to leadership in both their classrooms and their communities,” said John Crowley, Comcast’s Greater Chicago Region senior vice president. “Comcast is proud of the recipients and their achievements and thrilled we can provide support as they go on to college and the next phases of their lives.”

Recipients will be recognized at a ceremony hosted by Comcast at the Illinois Executive Mansion in Springfield on Wednesday, May 21.  WAND-TV news anchor Marianne Manko will serve as emcee for the event and speak to recipients and family members about the importance of helping others in their communities.

“We can’t thank Marianne enough for joining us again for the Leaders and Achievers Scholarship ceremony.  Not only is she an excellent host, she’s a role model for the recipients and a great example of someone who has a positive impact on and gives back to her community,” Crowley said.

Recipients will be recognized at a ceremony hosted by Comcast at the Illinois Executive Mansion in Springfield on Wednesday, May 21.  Since the 2001-2002 school year, Comcast has awarded nearly $20 million in scholarships to more than 19,000 recipients across the nation.  More than 160 students in Comcast’s Greater Chicago Region, which includes Illinois, northwest Indiana and southwest Michigan, will receive scholarships this year – 19 of this year’s recipients are from Central Illinois.

Banks need to be reliable. It is as simple as that. Whether a customer needs to access their money right away or wants to ensure that their personal financial … END_OF_DOCUMENT_TOKEN_TO_BE_REPLACED