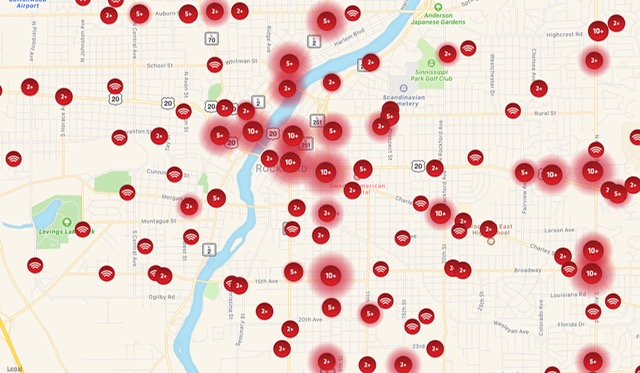 “I’m very pleased to see Comcast supporting additional outdoor wireless hotspots in Downtown Rockford,” said Rockford Mayor Larry Morrissey. “Comcast has made significant investments in broadband infrastructure in our community. These investments are helping both residents and businesses to stay connected to support 21st Century economic, education and entertainment options for our community.”

Comcast first launched the Xfinity WiFi network in Winnebago County about three years ago and since then has installed more than 22,000 hotspots in area outdoor locations, businesses and homes.

“Having access to the Internet throughout Winnebago County – and locations across the country – especially in key outdoor locations, will be a boon to our customers,” said John Crowley, senior vice president of Comcast’s Greater Chicago Region, which includes the Rockford area.  “Not only will they be able to access their content and information on the go, customers may be able to save money by using Xfinity WiFi hotspots in lieu of their wireless data.”

This addition of Xfinity WiFi hotspots is the latest in a long string of investments Comcast has made over the years in the Rockford area’s technology infrastructure.  All told, Comcast has invested on average $300 million a year in its Greater Chicago Region network – which includes Rockford – for the past 20 years.  Comcast has nearly 30,000 miles of network plant in the Rockford region, including more than 500 miles of fiber.

“Comcast’s advanced technology infrastructure is crucial to the future of Rockford’s and the region’s economy and their ability to compete,” said John Groh, president and CEO of the Rockford Area Convention & Visitors Bureau.  “Making investments now will help us create the kind of economy we’ll need to succeed in the future.”

In addition to its investment in its network infrastructure, Comcast plays a major role in several Rockford area economic development initiatives, including Alignment Rockford, the Chamber of Commerce, the Rockford Area Economic Development Council, Transform Rockford and others.

Comcast has installed about 1 million hotspots in Illinois and about 14 million nationwide.  Xfinity high-speed Internet customers can use the hotspots to stream TV shows, movies and other content on their laptops and Android and iOS devices on the go.

Comcast is proud to deliver high-speed Internet and other innovative telecommunications products and services, along with programs designed to close the digital … END_OF_DOCUMENT_TOKEN_TO_BE_REPLACED