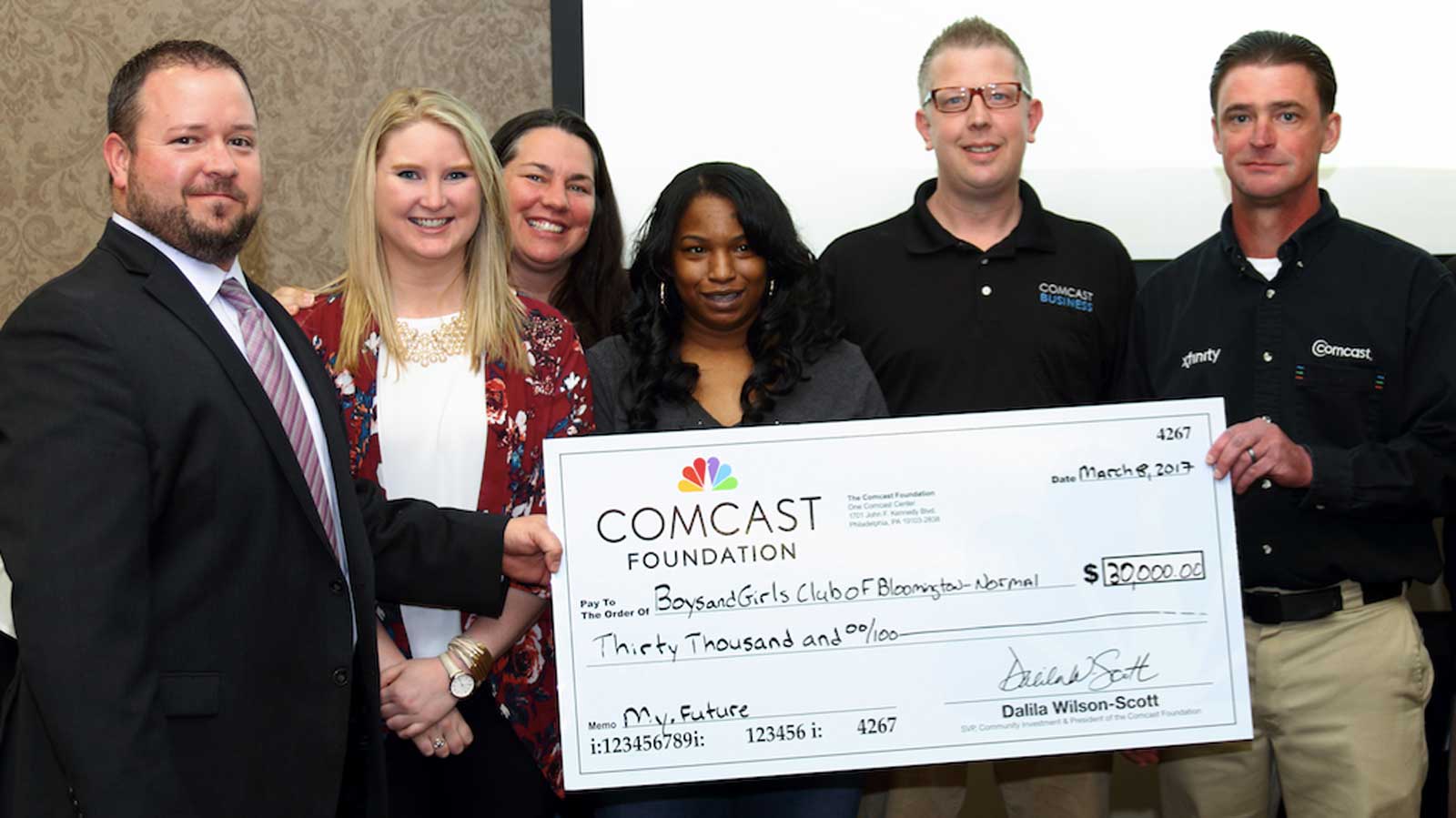 Boys & Girls Club of Bloomington-Normal announced today that it received a $30,000 grant from the Comcast Foundation to help expand the My.Future technology initiative, which uses hands-on technology training designed to equip Club kids with the skills needed to compete in a 21st century economy. Comcast announced that the grant will provide Club staff with training and funding to purchase state-of-the-art equipment including laptops, tablets, music studio tools and video-editing technology needed for the Clubs to fully implement and teach the My.Future curriculum.

My.Future is a cutting-edge technology education initiative that provides hands-on experience and enables Boys & Girls Club of Bloomington-Normal members to select from more than 40 activities to help them understand how to safely and productively engage online, and identify and develop digital interests – from Internet basics for technology beginners, to robotics, coding, game design and online journalism for advanced learners.

In 2015, the Comcast Foundation invested more than $3 million in Boys and Girls Clubs of America’s (BGCA) My.Future technology initiative.  BGCA is using $1.5 million to further develop and build-out the My.Future program.  The remaining funding is being awarded to approximately 90 local Boys & Girls Clubs across the country, including Boys & Girls Club of Bloomington-Normal to ensure they have access to the technology, tools and teachers to fully activate the program. The grant is part of Comcast NBCUniversal’s five-year partnership with Boys and Girls Clubs of America (BGCA).

About Boys & Girls Club of Bloomington-Normal

Boys & Girls Club provides a safe after-school environment for hundreds of kids on Bloomington’s Westside. 94% of Boys & Girls Clubs members receive free or reduced lunch at school and 75% are from single-parent households. The Club serves more than 800 youth annually, with 609 registered Club members and 208 youth served through community outreach. The annual membership fee is $25 per child. Dues are low so no child is turned away, although it costs the Club more than $500 per member per year to keep the Club open.

The Comcast Foundation was founded by Comcast Corporation in June 1999 to provide charitable support to qualified non-profit organizations. The Foundation primarily invests in programs intended to have a positive, sustainable impact on their communities. The Foundation has three community investment priorities—promoting service, expanding digital literacy, and building tomorrow’s leaders. Since its inception, the Comcast Foundation has donated more than $195 million to organizations in the communities nationwide that Comcast serves. More information about the Foundation and its programs is available at www.comcast.com/community.

Banks need to be reliable. It is as simple as that. Whether a customer needs to access their money right away or wants to ensure that their personal financial … END_OF_DOCUMENT_TOKEN_TO_BE_REPLACED