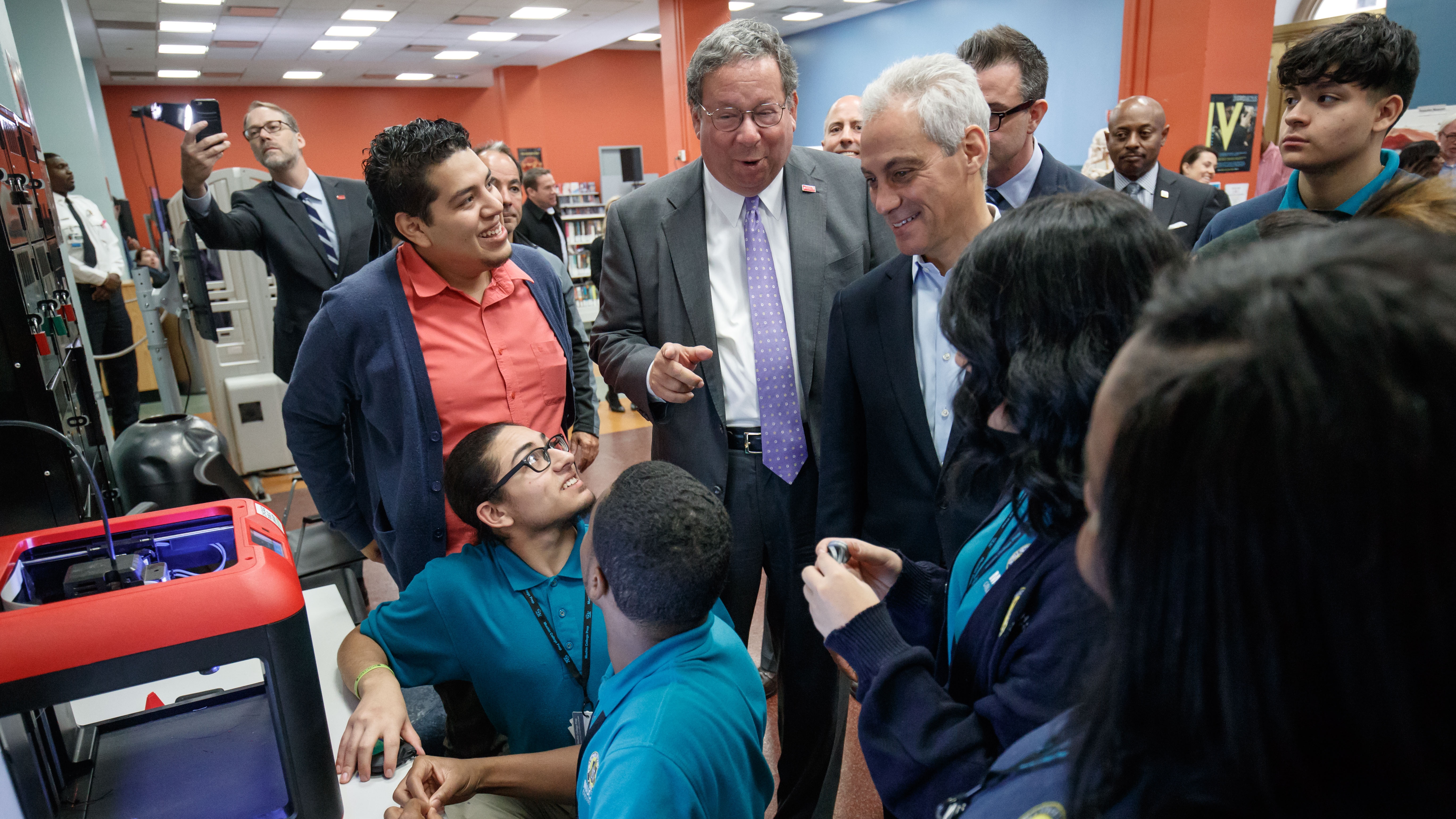 “I am incredibly grateful for corporate partners like Comcast that are helping to close the digital divide in Chicago by supporting vital efforts like Internet Essentials and these new Experience Labs,” said Mayor Emanuel. “By making the right investments together, we are able to support our residents in building the digital skills necessary to participate in the 21st century economy.”

Comcast’s investment with the Chicago Public Library Foundation brings together three CPL programs into a unique Experience Lab for Chicagoans of all ages to enjoy. Current programming includes YOUmedia digital labs for teens, CyberNavigator digital skills tutoring for adults and Maker Lab programming. Funding will support a designated space at each of the three branches for CPL, community organizations and other providers to deliver services to library patrons. Programming and services will range from workforce and digital skills training to lifelong learning programs –in an environment offering access to innovative technology and the Internet.

YOUmedia, CyberNavigator and Maker Lab programs are vital to CPL branches. The nationally recognized YOUmedia program, which will expand next year to a total of 20 free digital media labs around the city, creates links between students’ academic studies, their personal passions, and opportunities to engage with skilled mentors and peers who support and share their interests. Through August of this year, over 9,500 teens participated in YOUmedia workshops, representing a 29% increase over the same period last year. CPL’s Maker Lab is an award-winning advanced manufacturing lab that brings together people of all ages to explore their creative interests and strengthen Chicago’s economic competitiveness. CyberNavigators guide Chicagoans through the digital world and assist with online job search, communication and workforce readiness.

“CPL branches serve as neighborhood hubs for technology, digital skill building and lifelong learning for a record breaking number of patrons,” said CPL Commissioner Brian Bannon. “Comcast’s support will allow each library to better serve the broad range of patrons who use our space to look for work, study and complete school projects, and explore a variety of interests.”

“We are proud to work with dedicated elected officials, like Mayor Emanuel, CPL and other library systems, nonprofit organizations, educators, employees and advocates who all believe the Internet is essential,” said Comcast Senior EVP and Chief Diversity Officer David Cohen. “Our investment in the Chicago Public Library builds on Internet Essentials and will help Chicago residents harness all that the Internet has to offer for education, jobs, healthcare, news, information and entertainment.”

Comcast has been working to close the digital divide and bring the power of the Internet to low-income families in Chicago and locations across the nation for years.  Internet Essentials, the nation’s largest and most comprehensive high-speed Internet adoption program, is the centerpiece of Comcast’s efforts. 57,000 low-income Chicago households have been connected to high-speed Internet service at home via Internet Essentials to-date.  Since Comcast launched this program in May 2011, more than four million people around the country have benefitted.

Comcast has also supported CPL’s CyberNavigators, or digital skills tutors, at library branches citywide through additional grants to the Chicago Public Library Foundation. Through the support of many civic-minded individuals, corporations and foundations, the Foundation provides on-going funding for collections and a range of community-responsive programs, including Teacher in the Library, CyberNavigators, YOUmedia and One Book, One Chicago.

CPL is the largest provider of free digital access in Chicago, having provided over 1.3 million people free access to library computers in 2017. Its 80 branch locations provide free library services,resources, technologies and tools that Chicagoans need to reach their goals.

Since 2011, the City of Chicago has invested over $200 million to enhance library buildings and services. CPL announced multiple modernization and infrastructure projects at neighborhood branches, including a new branch in West Loop and major renovations to Whitney Young, Chicago Bee and Kelly branches. CPL also announced a first of its kind partnership with Chicago Housing Authority to co-locate four libraries and renovate a fifth.

Since 1873, CPL has encouraged lifelong learning by welcoming all people and offering equal access to information, entertainment and knowledge through innovative services and programs, as well as cutting-edge technology. Through its 80 locations, the Library provides free access to a rich collection of materials, both physical and digital, and presents the highest quality author discussions, exhibits and programs for children, teens and adults. CPL has received the Social Innovator Award from Chicago Innovation Awards; won a National Medal for Library Services from the Institute for Museum and Library Services; was named the first ever winner of the National Summer Learning Association’s Founder’s Award in recognition of its Summer Learning Challenge; and was ranked number one in the U.S., and third in the world by an international study of major urban libraries conducted by the Heinrich Heine University Dusseldorf in Germany. For more information, please call (312) 747-4050 or visit chipublib.org. To follow CPL on social media, visit us on Twitter (@chipublib) or Facebook (Chicago Public Library).

Internet Essentials from Comcast is the nation’s largest and most comprehensive high-speed Internet adoption program for low-income Americans.  It provides low-cost high-speed Internet service for $9.95 a month plus tax; the option to purchase an Internet-ready computer for under $150; and multiple options to access free digital literacy training in print, online and in person.  For more information, or to apply for the program, visit www.InternetEssentials.com or call 1-855-846-8376.  Spanish-only speakers should call 1-855-765-6995.