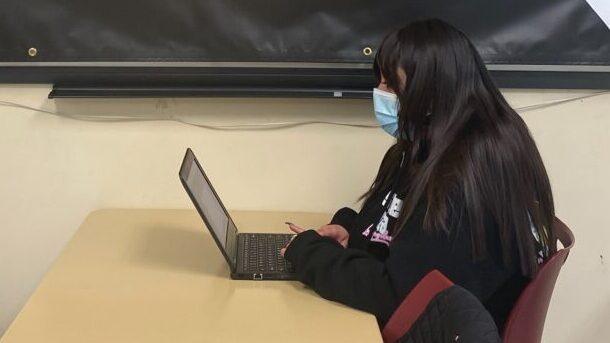 March 16, 2022 – Comcast announced today that it has awarded the Quad County Urban League (QCUL) in Aurora a $27,000 “Lift Zone Opportunity Fund” grant. The grant will support digital skills training at the organization’s Lift Zone, which Comcast opened onsite in July 2021. Lift Zones are WiFi-connected safe spaces where students can get online to do schoolwork and adults can get online to learn new digital skills, search for jobs and access an array of services.

“QCUL is dedicated to fulfilling its mission, which is ‘works to achieve equity for Black families and communities through social and economic empowerment,’” said QCUL President and CEO Theodia Gillespie. “One way we can empower the people and the communities we serve is to help them build the skills they need to thrive in an increasingly digital world. We appreciate Comcast’s long-term commitment to QCUL’s important work.” 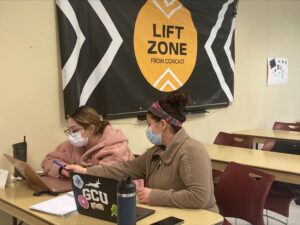 The QCUL Lift Zone is one of more than 1,000 Lift Zones throughout the country, nearly 80 in this region alone. The Lift Zones complement Comcast’s Internet Essentials program, a low-cost Internet adoption program for low-income families, which has helped more than 10 million people in America – 1.3 million in Illinois – connect to the Internet at home since it was launched in 2011.

“Through Internet Essentials, Comcast has helped hundreds of thousands of Illinois households cross the digital divide,” said John Crowley, Comcast’s Greater Chicago Region Senior Vice President. “I’m proud that Comcast recognized the impact of the digital divide early on, stepped up and now continues to offer solutions that further our commitment to organizations like the Quad County Urban League and the people and communities they serve through the creation of Lift Zones.”

Crowley noted that the federal government recently launched a digital equity initiative called the “Affordable Connectivity Program” (ACP), which provides eligible low-income households a credit up to $30 a month toward the cost of Internet and mobile phone services, including all of Comcast’s Xfinity Internet and Xfinity Mobile plans, as well as Internet Essentials. For more information, visit www.xfinity.com/acp.

Backed by a $1 billion commitment to reach 50 million people, Project UP encompasses the programs and community partnerships across Comcast, NBCUniversal and Sky that connect people to the Internet, advance economic mobility and open doors for the next generation of innovators, entrepreneurs, storytellers and creators. For more information on Project Up, visit http://corporate.comcast.com/impact/project-up.

About the Quad County Urban League

QCUL supports racial justice, civil rights and economic empowerment for African Americans and others within the Quad Counties (DuPage, Kane, Kendall and Will) of Illinois. As an advocate for educational excellence and economic self-reliance; we develop programs and services to empower children, youth and adults.

Sharing the commitment of the 110-year-old community-based Urban League movement,

Comcast proud that employees themselves recognize the company is a great place to work November 5, 2021 – Comcast was awarded a “Top Workplaces 2021” honor … END_OF_DOCUMENT_TOKEN_TO_BE_REPLACED