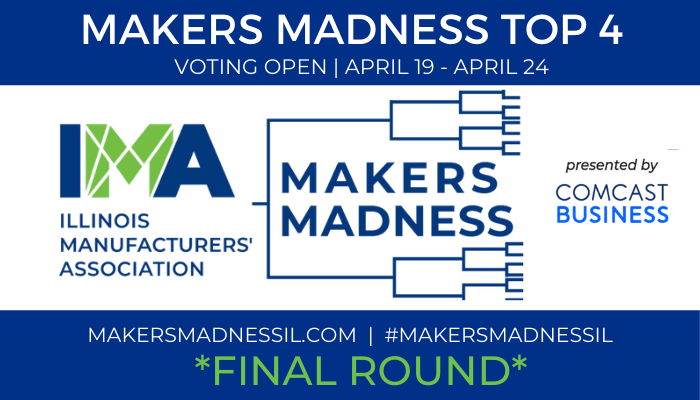 Voters to Decide “The Coolest Thing Made in Illinois”

April 19, 2022 – As voting opens in the final round of the third annual “Makers Madness” contest, four products have emerged as finalists in the bracket-style tournament hosted by the Illinois Manufacturers’ Association that lets voters decide which product is The Coolest Thing Made in Illinois.

Presented by Comcast Business, the competition celebrates the incredible work of the diverse manufacturing sector in Illinois, which has long served as the backbone of our state’s economy and has helped lead our recovery from the pandemic. Illinois manufacturers produce everything from life-saving vaccines and medical treatments to boundary-breaking electric vehicles and components used for space exploration. Our manufacturers keep store shelves stocked with nutritious food and delectable snacks, as well as create sporting equipment used everywhere from neighborhood fields to professional leagues. They make core structural products from steel, rebar and motors to chemicals and flavorings, and even create high-tech gadgets used for national defense and energy to power our homes and businesses.

Over the past week, voters chose their favorites in four head-to-head matchups between individual products, with 25,000 votes cast in this round. From an original field of more than 400 products, nominees for The Coolest Thing Made in Illinois have now been whittled down to the Top 4 which are: Fruit by the Foot made by General Mills in Belvidere; the R1T all-electric vehicle manufactured by Rivian Inc., in Normal; the Orion Spacecraft Capsule’s Aft Bulkhead, Barrel and Tunnel made by Ingersoll Machine Tools Inc., in Rockford; and Custom Blazed Diffraction Gratings manufactured by Inprentus Precision Optics in Champaign.

“We are thrilled to see people from every corner of the state vote for their favorite Illinois-made products. These Top 4 finalists clearly demonstrate the diversity, strength, innovation and dynamic nature of our state’s manufacturing sector, as well as the versatility of the men and women who work in our factories,” said Mark Denzler, president and CEO of the Illinois Manufacturers’ Association. “We look forward to seeing which of the products will emerge at the end of the contest as The Coolest Thing Made in Illinois.”

More details about the products in the “Makers Madness” Top 4 are as follows:

Fruit by the Foot

Manufactured by General Mills in Belvidere, Fruit by the Foot is a rolled fruit snack that at roughly 3 feet long keeps going and going and going. Available in a variety of flavors including strawberry tie-die, blue raspberry tie-die and berry tie-die, it is a perfect snack for all occasions, with its fruity deliciousness beloved by children and adults alike.

Manufactured by Rivian Inc. in Normal, the R1T is the first electric truck in production, featuring four motors, eight driving modes and up to 400 miles of range. It combines off-road capabilities with the driving style of a sports car, with acceleration from 0-60 mph in as quick as three seconds and towing capacity of up to 11,000 pounds.

Manufactured by Ingersoll Machine Tools Inc. in Rockford, the Orion Spacecraft Capsule’s Aft Bulkhead, Barrel and Tunnel are critical parts of the deep-space exploration vehicle, helping to comprise of the primary spaces where astronauts will work and live. The components are as durable as they are light, built to take humans further into space than ever before.

Manufactured by Inprentus in Champaign, Custom Blazed Diffraction Gratings are used with X-Ray, UV, and visible light for industrial and research applications, allowing for the creation of ultra-high line density and high-precision patterning of surfaces. Applications include semiconductor manufacturing, augmented and virtual reality glasses, as well as materials, chemistry, and life sciences research.

Voting for this final round is now open and will take place at www.makersmadnessil.com through 11:59 p.m. on April 24. Voters may cast one vote per day for any of the four finalists. The winner of the contest will be announced at an awards ceremony at the Governor’s Mansion on April 27, when The Coolest Thing Made in Illinois will be named.

“We’re down to the top four, and things are getting really exciting. We learn more about the awesome things being manufactured in Illinois with each round,” said Sean McCarthy, Comcast’s Regional Vice President of Business Development and Strategic Initiatives. “Comcast is proud to deliver the connectivity and technologies that drive modern-day manufacturing here in Illinois and elsewhere.”

Statewide, manufacturing generates more than $304 billion in economic output, contributing 12 percent to the state’s Gross Domestic Product – the largest share of any industry in Illinois. Manufacturers employ 562,000 women and men in Illinois at an average salary of $88,691, providing $52 billion in wages and benefits.

To ensure the state’s manufacturing sector remains dynamic and strong, the IMA successfully pushed for the passage of several measures to grow manufacturing in Illinois during the spring legislative session. This includes the MICRO Act, which would create tax incentives for companies to produce semiconductors and microchips in Illinois. Increasing production of these vital components in Illinois would help ease supply chain issues by ensuring access is not controlled by a handful of overseas providers.

March 22 – April 3: Voting on nominations to determine the Top 16

April 5 – April 10: First round of voting to determine the Top 8

April 27: Winner of The Coolest Thing Made in Illinois to be announced during an awards ceremony at the Governor’s Mansion

Banks need to be reliable. It is as simple as that. Whether a customer needs to access their money right away or wants to ensure that their personal financial … END_OF_DOCUMENT_TOKEN_TO_BE_REPLACED