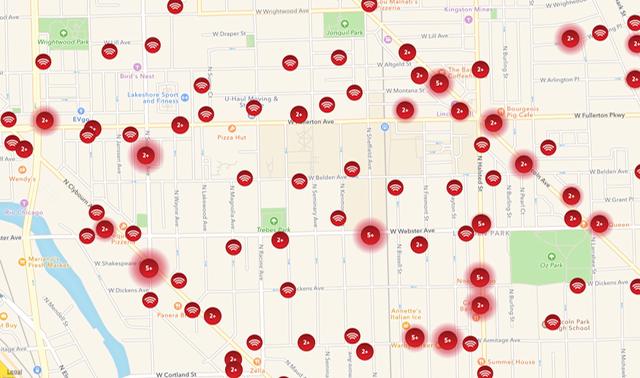 Comcast today announced that it has installed new Xfinity WiFi hotspots in outdoor locations bordering DePaul University’s Lincoln Park Campus, located at 2320 N. Kenmore Ave. in Chicago.  Four years ago, Comcast launched its Xfinity WiFi network and since then has installed more than 10,000 hotspots in businesses, homes and outdoor locations throughout Chicago’s Lincoln Park neighborhood – and more than 1 million in Illinois and 14 million nationwide.

The new WiFi hotspots around DePaul University will give students, faculty and area residents the ability to access the Internet at locations around the campus.  This is the latest in an effort to install WiFi hotspots adjacent to Illinois college campuses, including North Central College in Naperville,  University of Illinois in Champaign-Urbana, Northern Illinois University in DeKalb and Loyola University in Chicago.

“The Internet plays a vital role in community life and education,” said John Crowley, Comcast’s Greater Chicago Region senior vice president.  “Having access to the Internet at locations outside campus will help DePaul students stay connected so they can study and do research, as well as allow area customers to access their content on the go, including On Demand movies and TV shows.”

“I am pleased that Comcast is continuing to invest in its technology infrastructure in the 43rd Ward and is making its WiFi service even more widely available in the neighborhood,” said Michele Smith, Chicago 43rd Ward Alderman.

Comcast continually upgrades its high-speed Internet service in an effort to provide more and more value to customers.  Last month, Comcast launched its 1 Gbps residential Internet download speeds over its existing network in Chicago and other locations throughout the company’s Greater Chicago Region, which spans Illinois, northwest Indiana and southwest Michigan.  Comcast already offers businesses in locations across the region Internet speeds of up to 100 Gbps and in 2015 launched Gigabit Pro, a 2 Gbps fiber-based residential Internet service that’s available to about 2.4 million homes in the Greater Chicago Region.